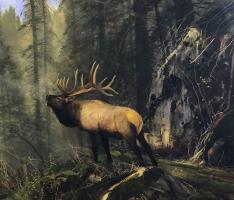 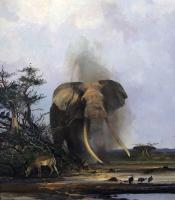 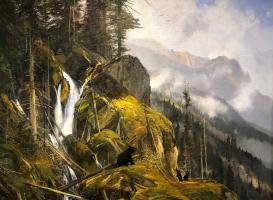 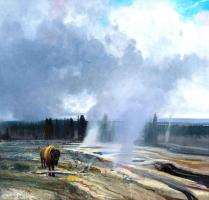 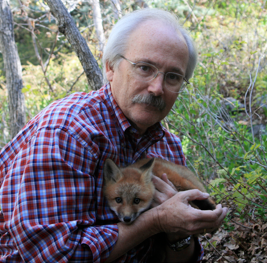 Michael Coleman was born and raised in Provo, Utah and spent his boyhood hunting, fishing and trapping throughout the Rocky Mountains, often taking a sketchbook with him. Early on, he decided on a career in art, studying at Brigham Young University and traveling broadly for subject matter.

Coleman quickly became a prominent Southwestern artist when in 1978, at the age of 32, he was given his first retrospective at the Buffalo Bill Historical Center. He exhibited at the National Academy of Western Art and at Kennedy Galleries in New York. Then, in 1999, he won the Prix de West Award at the National Cowboy Hall of Fame for his bronze of a moose titled “September,” which work has joined the permanent collection of the Hall of Fame.

He paints primarily in oil on board or gouache. He marks out key areas including the horizon line, working from the top to the bottom and adds highlights towards the end. His style is greatly influenced by many of the key early 19th century masters of the Hudson River School, such as: Henry Farny, Thomas Moran and George Inness, and the 20th century animal painter, Carl Rungius.

His paintings are rich in detail and muted in tone, true to the remote landscapes he chooses to illustrate. The Indian encampments, wildlife and hunting subjects portrayed against these magnificent areas are rendered in such a way as to give the viewer a sense of gazing on the past.

Coleman loves best the dusky-grey, misty, muted tones of fall and early winter and is known for his landscapes of rich colors and detail. He combines realism and atmospheric styles, often with animals depicted in those autumn settings when they are in their prime, but his pieces always suggest a balanced harmony between artist, animal, and nature.